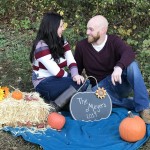 The Cutest Pumpkin Proposal with a Baby!

Emily & Vince How They Met We have lived down the street from each other our entire lives growing up and went to grade school together. And one of my bestfriends growing up was his sister Brittany. The Proposal We were in the middle of getting our first family pictures done with our daughter Harlee … 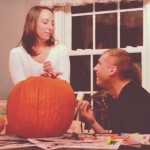 Pumpkin season is not quite over yet. You can still use it as a prop for your proposal! 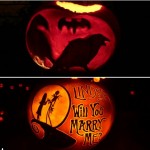 The Pumpkin Spice Latte is back, which means it’s not too early to start thinking pumpkin when it comes to proposing. Here are three ideas! 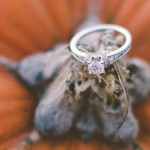 I wanted to surprise Amy and do it at a time she wouldn’t expect. It was the day before her birthday and we had a party planned for that night at our house. We also had my brother’s engagement party the night before, so us getting engaged was far from her mind. I decided to do it the day of the party because I knew she wouldn’t expect it and our house would be filled with family and friends a few hours later, the perfect way to celebrate! 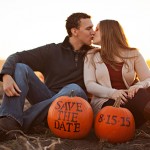 On the way home Brad suggested that we have a pumpkin carving contest between the two of us. We would each carve a pumpkin in secret and then reveal the finished product at the end.