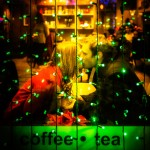 A Romantic Winter Proposal with Roses

As I was putting the finishing touches on my outfit, another rose arrived instructing me to go to the place where we first met. I knew immediately where I must go so I quickly putt on my coat and headed to our elementary school. There, Michael’s mother was waiting for me to give me my next rose and clue. I was then clued to go to the coffee shop that we have spent many hours throughout the years talking and laughing about our future. 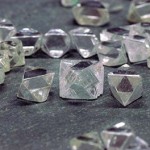 “Ice” Predicted for the Holidays

The holidays conjure up frosty scenes of crisp, icy-white clean landscapes. But there’s another type of “ice” that’s seen more often around holiday time. The diamond engagement ring! Did you know that 1/3 of all engagements happen during the frostiest months, from Thanksgiving to Valentines Day? Not only do diamond engagement rings become more predominant during the holidays, but diamond fashion jewelry, a preferred gift by many women also heads to the top of many gift wish-lists. This is the “ice” that many women look forward to seeing! 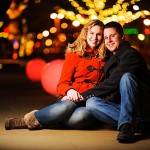 Kevin and I met through a mutual friend. He came over to swim and was so shy that he only said four words to me! I remember thinking that it would be my luck to end up with him. It was! 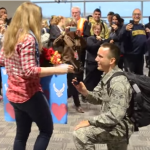 Jon went away to basic training for the Air Force, leaving behind his girlfriend Emma. When the two had time to talk on the phone, they knew they wanted to get married when he got back, so he proposed over the phone in October. However, he didn’t count that as a “proper” proposal. So, when … 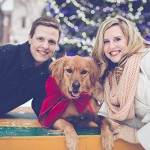 Jared knew how important friends and family were to Nicole, therefore he wanted to be sure to incorporate them into the proposal. He knew he wanted to do a scavenger hunt, so he also included all of their important “firsts” to reminisce about where the relationship had been, and how much it had grown. 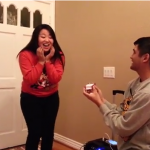 A Karaoke Christmas Eve sounds pretty typical, right? To me it sounds awesome. This couple was spending time with their family and chose to sing a song from their favorite movie, Disney’s Frozen. For reference, the song they’re singing is at the end. If you haven’t seen this movie, it’s really not just for kids. … 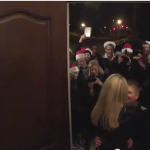 Dennis wanted a special proposal for Trinity. He knew family was important to her, so he got the word out that he wanted to do a proposal involving everyone. He put together a caroling project, they practiced the night before, and then they followed through with his plan. Trinity was stunned. She had no idea … 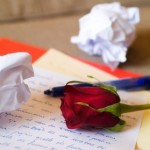 I’m happy to see this time of year,
because our family goes from afar to near.
Having us all together so close is what makes me happiest the most. 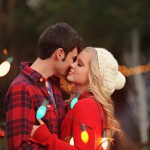 Merry Christmas from all of us here at Engagement 101! We hope your Christmas is extra special and filled with love (and maybe even a proposal for you too?). As you spend time with your family and loved ones today, we thought we’d share this funny little proposal where a guy wraps up his bride-to-be’s … 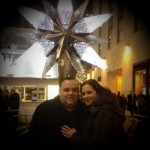 A Magical Christmas Proposal in NYC !

We spent the day in NYC, looking at all the Christmas decorations. When it got dark, he took me Rockefeller Center to see the tree!